BioPhero’s first pheromone product is proving itself in field trials across the world.

Various formulations of BioPhero’s pheromone Z11-16 aldehyde are being tested in crops such as rice, cotton, tomatoes and other vegetables in India, China, Indonesia, Greece and France. The efficacy of the pheromone in terms of controlling pests is being tested for insects such as the striped and yellow rice stem borers, the cotton bollworm and the diamondback moth.

“We are extremely pleased with the results. Although many of trials are yet to be concluded, a preliminary pattern is emerging of our pheromone reducing the insect populations dramatically,” he says.

A unique combination of strain engineering, yeast fermentation and chemistry enables BioPhero to produce pheromones at a cost that competes with pesticides. This means that pheromones can now be used where it matters most – in large-scale row crop. Hitherto, pheromones have been too expensive to be used in anything but high-value crops.

BioPhero offer a safe and environmentally friendly solution to pest control. Pheromones are insect perfume used to attract a mate. If sprayed in a field, the insects can no longer locate each other. No mating means no plant-eating larvae.

Further field trials will be carried out in 2022.

The trials are being carried out under the auspices of the EU-funded PHERA Project.

This project has received funding from the Bio-based Industries Joint Undertaking under
the European Union’s Horizon 2020 research and innovation programme under grant
agreement No. 886662 (PHERA). 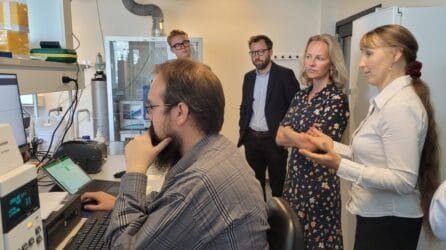